A cockatoo that is resting or will soon go to sleep, will put his feathers a little bit up (it will look fluffy) and will move the feathers around to bill to cover part of the underside of the bill (see picture). Often it will stand on one foot. It can keep its eyes open or a bit closed. This body language shows that the cockatoo is calm and is resting. Cockatoos can also sleep like this.
A cockatoo that is very sick will also puff up its feathers and site like this for most of the day with his eyes half closed or closed. This is a very bad sign. 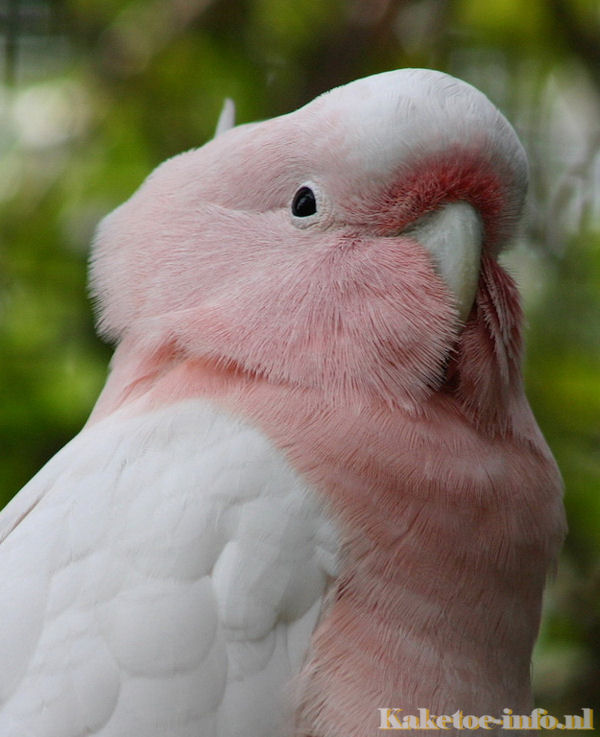 a Major Mitchels cockatoo with his feathers over his bill 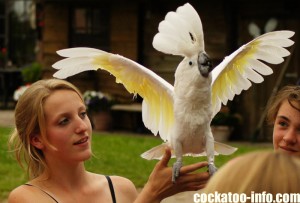 When a cockatoo is active and excited, for example when it is playing or showing off, it will show this with its body language. It will put this crest feathers up and move a lot. Generally it will be very active and make excited noises. This can be seen as an happy confident cockatoo. The feathers on the side of the head are not erect, only the crest. 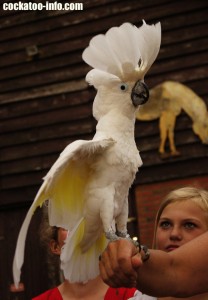 Cockatoos can also show display behavior, they will show how big and strong they are. This is to impress other cockatoos of its group (or humans) and to discourage rivals. You cockatoo will spread his wings, raise its crest, jump or flap its wings and make a lot of noise. I think generally you can interpret this as a happy confident cockatoo with a hint of wanting to assert itself. However this postive behavior can quickly change to unwanted behavior like biting, because if the cockatoo feels more confident he is more likely to bite anyone who does something he does not like.

Scared and aggressive at the same time

When a cockatoo is both scared and aggressive, it will try to chase the source of this emotion away using its body language. For example when a cockatoo that is not used to cats sees a cat, it will show this behavior. It will puff up all its feathers to look really big, it will open its bill and face the opponent making loud hissing noises. Instead of running it will try to face the treat with aggression with the goal of scaring it away.

When a cockatoo is really scared, for example by seeing a bird-of-prey cycling in the air above it, it will generally show fear by putting all its feathers very close to its body, standing very erect and attentive and sometimes shout an alarm scream. It can also try to flee by flying away or hiding behind a trusted human.

When a cockatoo is aggressive towards a particular person, it will look at him very directly, walk towards him in a straight line and open its bill to bite him. Following every move of someone is also a sign of aggression towards that person. When the cockatoo keeps his feathers very tight towards its body it is likely to attack the person, if the cockatoo keeps his feathers fluffed up it is trying to intimidate the person and is less likely to attack. 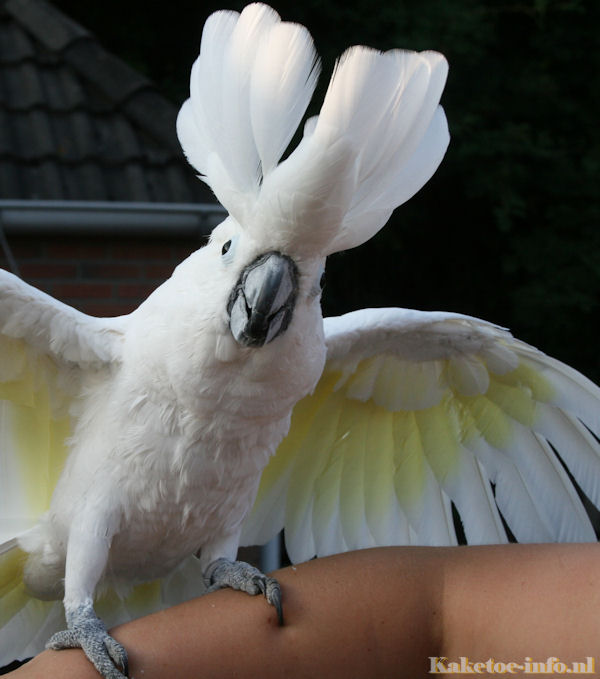 This Umbrella Cockatoo is happily displaying, trying to get attention.

Go back to previous page:
Go to next page: Screaming