Everyone always asks me: “What is the crest for?”  and “What does it mean when a cockatoo raises its crest?” .

It is hard to answer this question, because you can never know the true intentions or thoughts of a bird. What I can tell you, is in which situation it will raise its crest.

When the crest goes up 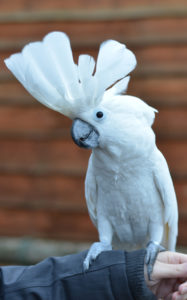 My Umbrella cockatoo will erect its crest when: it greets me, it shows off, during jumping and “dancing”, when he knows he did something naughty and just after he was startled. I think the crest is mostly used to make him look bigger and more impressive.
When aggressive by Umbrella cockatoo will not erect it’s crest, it will either erect all it’s feathers over his whole body, or he will stare at the person he is aggressive against. Erecting the crest is not a sign of aggression or anger at all.

You can also not really say a cockatoo is happy when he erects his crest. When displaying and greeting the raising of the crest seems to be associated with something positive, but after being startled it also raises the crest. A combination of reading body language and knowing your bird will give you much more information about the intentions of your bird than just the crest.

Use of the crest in nature

In nature the crest probably serves two purposes: communication with members of the species and discouraging predators.

In communication with conspecifics, the crest serves as a signal to transfer emotions, intentions and warnings about predators in the environment.
Predators can be confused or discouraged to attack a cockatoo when it erects its crest, because the bird seems bigger, the bright colors can be surprising and it signals that the cockatoo has seen the predator.