A cockatoo has the same senses as we do, but they use their senses differently. Hearing, sight, touch, taste and smell play a different role in the life of a cockatoo than in our lives. In this page you will find a short summary of the differences. 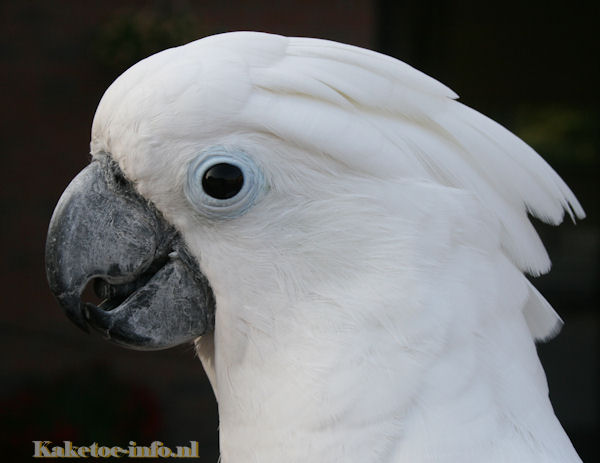 Head of an Umbrella cockatoo

Some people (especially children) wonder where the ears of a bird are, or if they have any! Actually the hears are in a similar position on the head of a cockatoo then our ears, but birds lack the auricle. Basically the ear is just a hole. It is covered by feathers.
Cockatoos have excellent hearing and mainly use this in nature to keep in contact with other cockatoos of its flock and to pick up sounds of predators. In nature cockatoos will almost incessantly scream to each other to stay in contact. 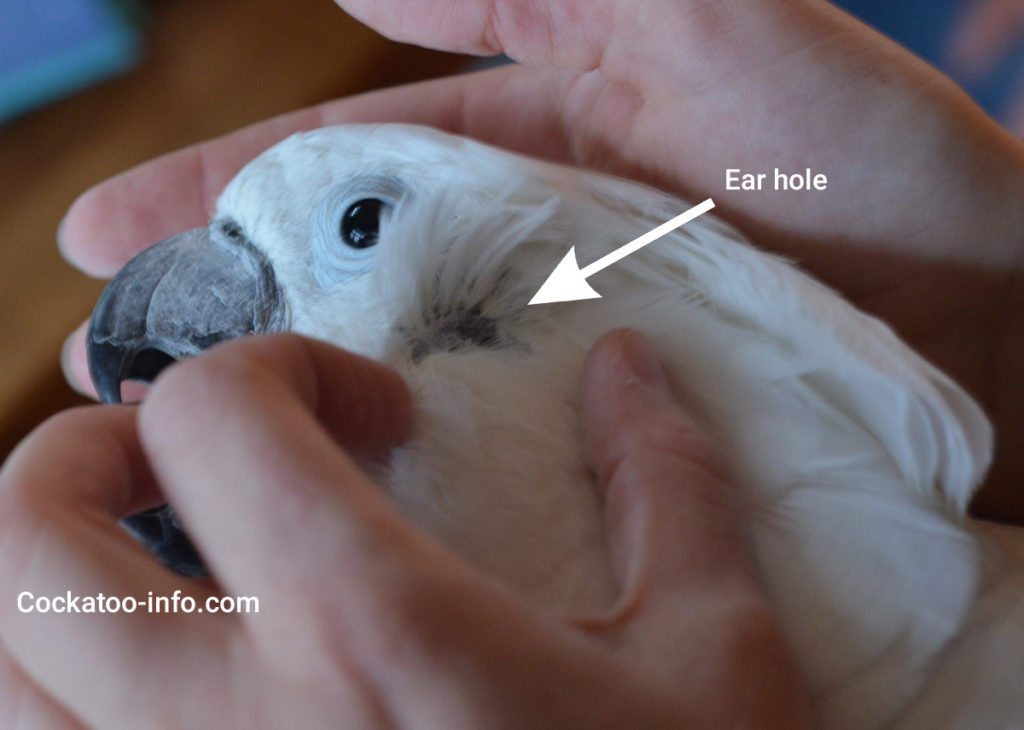 Cockatoos have color vision, actually this color vision is even better than the version that humans have. This is because birds have four light-sensitive pigments in the retina of their eyes, while humans have three pigments. Each pigment gets activated by a different wavelenght of light, producing signals to the brain which will interpret this as color. The fourth pigment of birds corresponds to ultraviolet light. For us this light is invisible, but for cockatoos it is one of the colors.
Another interesting difference in the sight of cockatoos and people, is that birds see more images per second than humans do. Fast movements are therefore seen more clearly by birds than by humans. During flight this is of course very handy.
In the dark or near-dark cockatoos see as badly as we do.
Sight is the most important sense for cockatoos. Localizing food, shelter and other cockatoos mainly is dependent on sight, while other species like dogs and rodents mainly depend on smell and touch. Hearing is the number two sense of cockatoos.
The eyes of a cockatoo are on the side of the head, making it possible to see almost full circle around them. Their perception of distance is less good than ours, because the overlap of the vision field of both eyes is very small. Species that have their eyes facing forward, like humans do, have a large overlapping vision field of the eyes making it possible to measure distances very clearly. What is a funny consequence of the eyes of the cockatoo being on the side of the head, it that a cockatoo will look up to the sky by tilting his head sideways. As humans we move our chin up to look upwards, unconsciously expecting birds to do the same. When they don’t, it is a funny sight (at least to me!).

A cockatoo uses his sense of touch mainly with its tongue and bill, not its feet. If an object is hard or soft (and if it can be destroyed easily) will be determined by biting in it or feeling the surface with its sensitive tongue.

Sense of taste in cockatoos 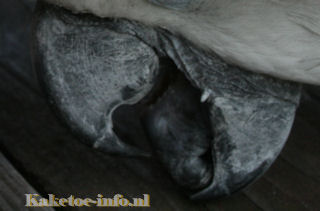 The tongue of a cockatoo

The ability to smell of cockatoos is limited. In nature they depend on sight to find food and on sound to communicate with other cockatoos. The brain area that is used to process smell is very small in parrots and cockatoos, indicating that their sense of smell is not well developed.

Go back to previous page: Development
Go to next page: Difference in sexes