Parrots are famous for imitation of speech. They can mimic human speech or sounds perfectly. Especially the African Grey Parrot is a master in this. Cockatoos can also imitate sounds, but they are not as good in this as many other species. They will learn less words and their accuracy in imitating is limited.

A “talking” Moluccan cockatoo. You can’t understand what he is saying, but these are not natural sounds for Moluccan cockatoos, these sounds that have been taught to him. As you can hear the accuracy of mimicking is not that good. 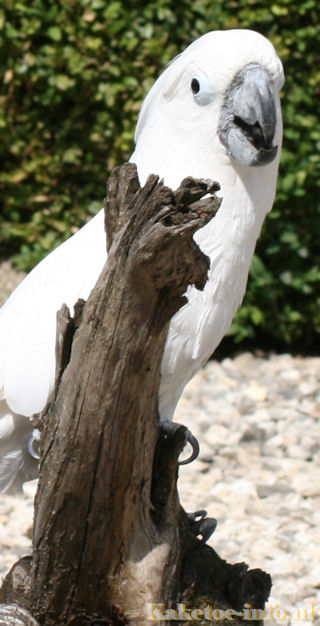 Most cockatoos will only learn to speak around 20 – 30 words, without even learning to mimic the voice of the person that taught them the words. Inflection and tone is often copied more accurately.  Cockatoos are also known for “babbling”, this is a continues flow of sounds that sound like talking but has no resemblance to meaningful sentence whatsoever. It seems like this is what the cockatoo mimics from hearing two people talk to each other.
Natural sounds are more easily mimicked than words, so barking of dogs, laughting of people or the sound of chickens can be mimicked quite accurately.  Galah cockatoos are better imitators than other species of cockatoo.

A cockatoo cannot understand language. Birds don’t have words and sentences like we do, they communicate with body language and screams. A cockatoo can learn to associate a word or sound with an object or activity. If you will greet your cockatoo in the morning with “Good Morning!” and in the evening with “Sleep Well!” he can learn to great you with the correct words at the correct time, even before you say your line. If you give your cockatoo some nice treat when saying a specific word, some cockatoos will try to get a treat by saying this word to you. And actually it is the human that is teaching this to the bird; if you hear him ask for a treat, you are the one to give in to this request. This enforces the behavior.  Likewise tricks can be initiated by saying a word, like “Kiss!”  to have the cockatoo touch your mouth with its bill. It does not know what a kiss is, but it does know that if he performs the behavior after the command “Kiss!”  he will get a treat. Again some birds will even try this the other way, to say “Kiss!”  themselves, do the behavior and expect a treat. Who is training who?

This is a talking Moluccan cockatoo

Go back to previous page: Screaming
Go to next page: The use of the crest