The Little Corella (Cacatua sanguinea) is one of the small species of cockatoo. It resembles the Goffin’s Cockatoo. It’s feathers are white, a small rim of pink-orange feathers around the bill and yellow feathers under the wings. The bill and feet are bone-colored. The crest is small and white. The blueish naked patch around the eye is much bigger than in other species. 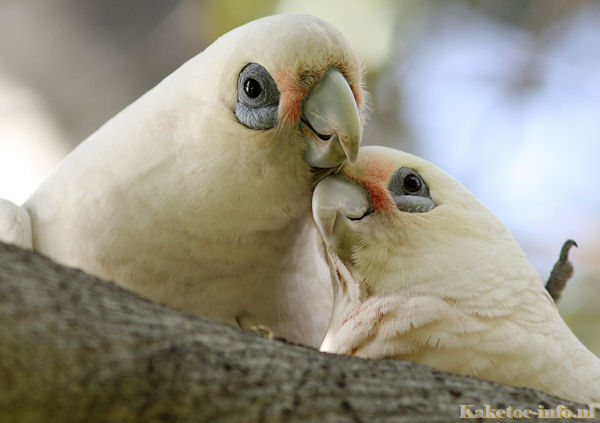 This species is one of the most common species of cockatoos in the wild. It occurs in Australia, mostly on open fields and is increasingly common in urban and agricultural areas. This species is one of the few species of animals that thrives because of human influences in Australia. They adapted to the higher availability of water in man-made wells and to the abundance of food provided by agriculture. Farmers are not thrilled about these birds, as their enormous swarms can quickly destroy a harvest or grain storage facility.

The little corella as a pet

In Australia this species is very common as a pet. Of course this is partly because they are very common in the wild and therefore readily available and easy to obtain. This species is easily adapting to living with humans and can become very tame, even when it is not raised by humans as a baby.