There is quite the debate about clipping the wings of birds. Birds fly and seeing a bird fly is beautiful. But when you have decided that you keep a cockatoo as your pet, you are also responsible for his safety. Sometimes it is simply not safe to have cockatoo flying around. The choice becomes keeping it always caged, chained or indoors, or clipping the wings. In my opinion it is better to take a pet cockatoo safely outside than to have it be able to fly with all the dangers of getting lost, getting hit by traffic or otherwise be in serious trouble. 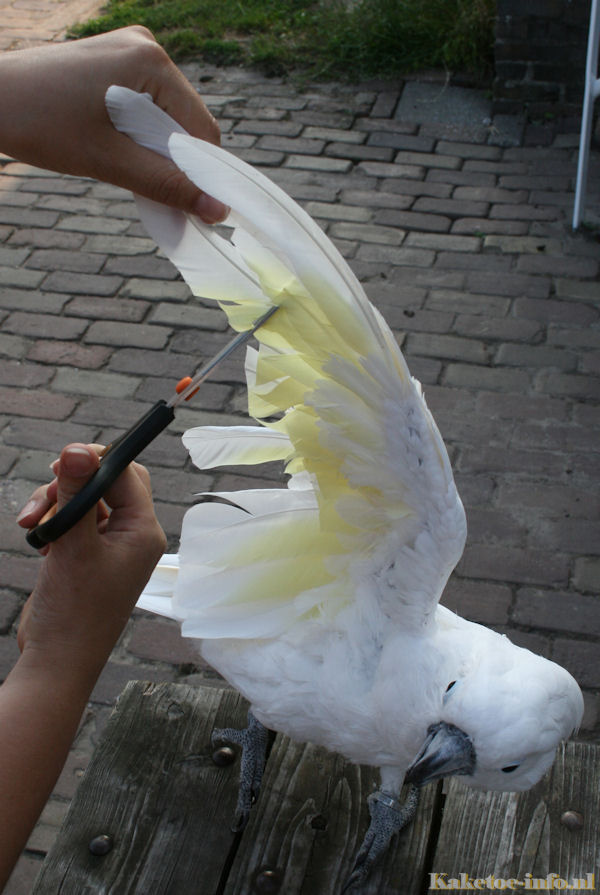 Clipping the wings of a cockatoo does not hurt. It does not need to be restrained even

Why clip the wings of a cockatoo?

If you take your cockatoo outside, there is a chance that he will fly away if its wings are not clipped. Even the most tame and trusting cockatoo can fly away, for instance because it got scared by a plane, cat or bird of prey. Once a cockatoo flies away in panic, it can be very hard for it to find its way back home. In nature a tame cockatoo does not stand a chance to survive for long, so getting lost is a serious danger to pet cockatoos. Also traffic, water and predators can be deadly for a lost cockatoo. To prevent flying away and thus keeping your pet safe, you can clip its wings.

How to clip the wings of your cockatoo

It is not hard to clip the wings of your cockatoo yourself. If he is tame, it can be even without any stress to the bird. A tame bird can hold out his wing when asked and will allow you to cut the feathers with sharp scissors. It does not hurt and often doesn’t even seem to notice.
When your cockatoo is afraid of scissors or of people, it can be a bit harder to clip his wings. Draping a towel around his head in a playful manner, obscuring the scissor from his vision can work. You can then quietly and carefully clip his wings.
If you can’t trick your bird into allowing the scissors near to him, you need to restrain your bird when clipping his wings. Best is to have this done by someone else than the owner, because your bird will remember the event and the person that did it to him. He will generally become mistrusting to the person that restrained him against his will. To restrain the cockatoo, use a big towel or thick gloves and hold the cockatoo firmly. Then spread out a wing and cut the feathers.

Which feathers should be cut? 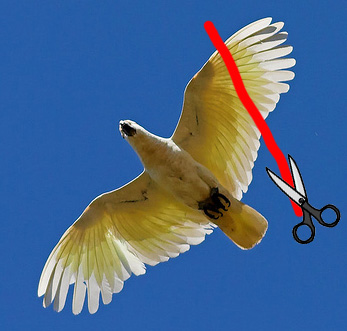 One method of clipping wings

When clipping the feathers of a cockatoo, you need to cut the primaries (flight feathers) until the edge of the coverts. On the picture you can see which feathers I am talking about. You could also leave the first two feathers intact, making it seem like the wing is unclipped when the bird folds his wings. This is a matter of personal taste.

You can cut the feathers on only one wing, or of both his wings.
When you cut only one wing, you prevent your bird from flying because he will be imbalanced. Generally it looks better to have only one wing clipped, because then the other wing is still intact.
When you clip both wings, you reduce the surface area of the wings making it much harder for your cockatoo to provide enough lifting force to fly away. Some cockatoos can manage to lift themselves a small distance, but this is very tiring for it. Some people say this method of wing clipping is better, because the bird still retains some ability to fly to use when it is in danger. If it is really scared or is being attacked by a cat or dog, it can still fly itself to safety.

If you choose to allow your cockatoo to regrow its feathers, you can just stop clipping the wings. Your cockatoo will find out soon enough it can fly again. Make sure it cannot fly away or fly into danger.

Go back to previous page: Caring for the crest
Go to next page: Showering a cockatoo