The crest of a cockatoo needs special attention if you are keeping your cockatoo alone. In nature or in group housing other cockatoos will care for the crest of each other, but in solitary captivity you need to do this. Because the crest feathers are so long and are located on the head, a place unreachable for the bill, your cockatoo cannot take care of the feathers himself. Taking care of these feathers is called preening.

Growth of the crest feathers

All feathers grow out of the skin with a cover made of calcium-like material. It is a brittle white cover that surrounds the feather. It makes the feather look like a straw. Under this layer is the actual feather, already fully formed. The cover needs to be removed to release the feather, otherwise the feather will just look like a long soft spike or straw. The cover of the feathers on the body of your cockatoo will be removed by your cockatoo when it is preening itself. You need to do this for the feathers on his crest and neck, because he cannot reach those with his bill. How to do this is explained in the next paragraph. 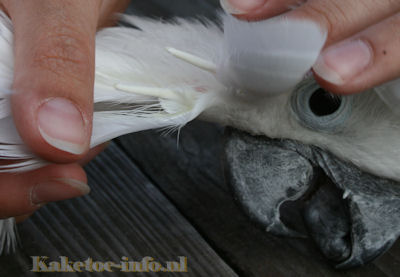 Some pet shops sell toys or other objects that are supposed to help your cockatoo preen his own crest feathers. They say he can do this by rubbing his feathers against the toy. These toys are unnecessary and a weak replacement for actual preening by a human or by another cockatoo. If you have a very wild solitary cockatoo that will not allow you to touch it, you could consider these toys to allow your cockatoo to tidy his own crest feathers. I am skeptical if these toys actually do the job of removing the cover of the feathers. Next to tidying the feathers preening is also an important social activity for cockatoos.