There are 21 species of cockatoo in the world. Every one of these species has a crest that can be put up or down. All species occur in Australia, Indonesia and the island around Oceania.

The species of cockatoo can be divided into white cockatoos (Cacatua species), “dark” cockatoos (Calyptorhynchus species) and a few other species. At the bottom of this page you will find a graph of the relatedness of these species. Here I will list all the species and add a link to a page that describes this species more closely.

In the next graph you can see how all the cockatoo species are related to each other. You can determine the relatedness of two species by comparing the length of the bars,  less distance between species means more relatedness.  Species that are less related to each other, will have a common ancestor that is farther up in the tree (to the left) than species that are more closely related. In this particular phylogenetic tree, the Palm cockatoo (Probosciger) is the least related to all other species of cockatoos. In the graph you can also see that there are two groups of Cacatua species: the bigger species (with Cacatua alba) and the smaller corellas  (with Cacatua sanguinea). The Raven cockatoos are a separate group as well, with five species that are more related to each other than to all the other cockatoo species. 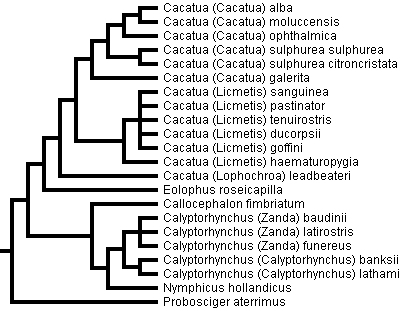 Phylogenetic tree of cockatoo species, showing their relatedness to each other.

Click on the link for more information and pictures of this cockatoo species.