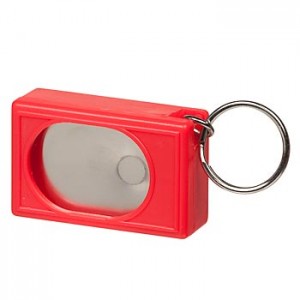 The clicker method is a simple and effective way to teach your cockatoo new tricks. It is actually very similar to the ‘normal’ training method described here, with the difference that it makes use of a little device that makes a ‘click’ noise. A so-called clicker.

In the clicker method, you first learn your cockatoo to learn. After that, you can teach him anything is small steps. The attention span of a cockatoo is around 10 to 15 minutes, keep your training bouts limited to this time to keep your bird focussed.

A clicker is a very small and cheap device that clicks when you press your thumb into it.
The benefit of a clicker compared to your voice or another device, is that it always sounds the same and can be handled using one hand only.

The theory behind the clicker method

Just like the ‘normal’ training method, you want to learn your cockatoo to understand the following chain of events:
command > behavior > click sound > reward
The reward is a small piece of food that your cockatoo loves to eat. The command can be anything from a hand/body sign to a sound.

As soon as your bird shows a behavior that looks a bit like the trick you want to teach him, you have to click and give him his reward. When you can predict when he will do the behavior, quickly say the command word before he performs the behavior. Very quickly your cockatoo will understand that a click means he will get a reward soon.
First click on any behavior that seems close to the desired trick, later only click on the correct behavior. Don’t be tempted to settle for less when he already correctly performed the behavior a couple of times. Let him figure out that behavior triggers the clicker. Start using the command whenever possible and soon only click and reward when he performs the trick after you give him the command.

Soon your cockatoo will learn that when the clicker is involved, you want something from him. Smart birds will start to look for the trick you want him to learn, trying different behavior and remembering very well what triggered the click before.

Example of learning a trick

Let’s say you want your cockatoo to make a turn (spin once) on his perch. This is how you do it.

This video shows clicker training, but instead of using a clicker the word “yes” is used. The method and result is the same.

Go back to previous page: Learning tricks
Go to next page: