In nature the nails of cockatoos are constantly worn down by climbing, walking and other activities. Therefore the nails will continue to grow the whole life of your cockatoo. In captivity the nails usually do not wear down as much or as quickly, resulting in nails that are too long. If this happens, you need to cut the nails of your cockatoo.
Too long nails will cause problems walking, climbing and positioning the feet correctly. When the feet are not positioned correctly, the nails will often not wear down effectively making the problem worse.

When are the nails too long?

If your cockatoo places his foot on a horizontal surface, he should be able to stand on his feet and on the tip of the nail. The nail should not bend to one side to be able to rest the tip on the surface. The toes should also not float in the air because of the length of the nail. If anything like this happens, the nail is too long and needs to be shortened. If one nail is too long, this does not mean all nails are too long.

Cutting nails can be stressful for a cockatoo. Even when he is very tame and used to being picked up, touched and examined, he still can be fearful of nail cutters or too much attention to his nails. The first thing you should do it check if your cockatoo will tolerate you using a nail file or nail clipper without struggle. If he does, then you don’t need to restrain him. Using a nail clipper on his nails could hurt, because the nail will be twisted a bit when cutting. If you need to restrain him, you can better have this done by someone else than the owner. Your cockatoo will remember very well who has restrained him or who was with him when this scary thing happened to him. Afterwards he will not trust this person so much any more. 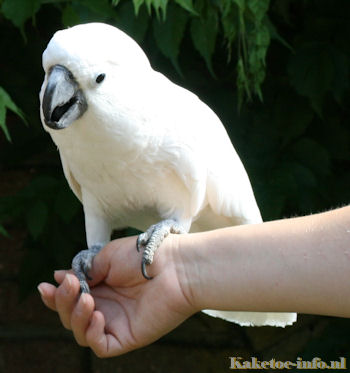 The nail should not be shortened too much, because there is a blood vessel in every nail. This blood vessel does not extent to the tip of the nail. The tip of the nail and the part that is too long, does not have blood or nerves in it. This is the only part that has to be cut. In the picture on this page you can see how far the blood vessel extends. Because the nails of most cockatoo species are black, you cannot see the vein. If your cockatoo has white or bone-colored nails, you should be able to see the blood vessel when you hold the nail against the light.
When you accidentally cut into the vein of the nail, it will bleed a lot. The blood vessel in the nail takes a long time to close because there is no soft tissue surrounding it to close the wound. It will close by itself however, but it will take some time and some blood loss will occur. If it is still activly bleeding after 30 minutes, you should call a avian veterinarian for advice. There are treatments that will immediately stop the bleeding.

The nails of a cockatoo are and should be sharp. If you have your cockatoo standing on your bare arm or hand it will leave some very small white scratches. I don’t recommend cutting the nails of your cockatoo a lot to make them dull / blunt. You could use a nail file to get the most sharp tip off the nail, but in general I think it is best to leave the nails as they are if they are not too long.

The natural ways to wear down nails

You can increase the wearing down of the nails of your cockatoo by providing him perches of different diameters, by allowing him many options to climb on real wood, by allowing him to walk on rough surfaces like stones and by buying him special perches with a layer of rough cement or calcium on it.

Go back to previous page: Showering a cockatoo
Go to next page: